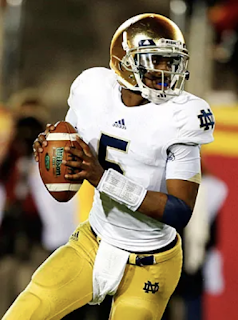 Wow, what a season from what used to be perennial favorites in earlier decades.

The Fighting Irish have come back and have an excellent shot at the Bowl Championship Series title. Of course, Notre Dame does not have it all wrapped up as yet even with their Number One Associated Press final end of season ranking. They play Number Two, Alabama on January 7, 2013 for the overall BCS championship. If the Irish go on to win it would be there first title since 1988!

Being an alumnus from both Michigan State and Michigan I don't have a great love for Notre Dame but I do congratulate them for a wonderful season and wish them well in seeking their 14th overall NCAA Football title. Interestingly enough they are tied with Alabama at thirteen NCAA titles each.

The article, titled Notre Dame holds No. 1 in AP poll, from Sports Illustrated is written by staff.
Posted by Edward R. Eroe at 13:19