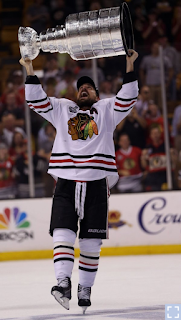 Ok I have to admit that I watched no hockey on TV this year preferring instead to participate in sports rather than being a couch potato. Even harder to admit because I have been a Detroit Red Wings fan since my childhood and remembering going to games at the old Olympia Stadium in Detroit with my father.

Last night I was talking to my son Alex after my yoga class and with him at the gym working out. He said, "Dad, you have to turn on the Stanley Cup as Chicago could take it all if they win." So I did turn on the TV to find out there are 2 minutes left with Boston up 2-1.

Low in behold the Blackhawks scored twice in the span of 17 seconds then proceeded to take the game and the Stanley Cup. All I can say is Wow, and glad I was talking to Alex and turned on the game. Congratulations to the Chicago Blackhawks!

See the story and highlight video on this NPR story titled, 17 Stunning Seconds Give Blackhawks The NHL's Stanley Cup.
Posted by Edward R. Eroe at 09:12