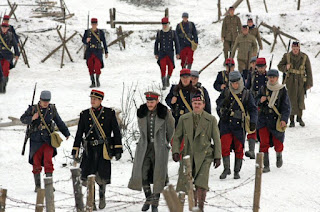 I saw an excellent movie last night called Joyeux Noel, which is a French film from 2005. It is set in the trenches along the French and German border during World War I on Christmas Eve and Christmas Day in 1914.

This is a true story of humanity that follows the stories of the men fighting the war from Scotland, France, and Germany that lay down their arms and celebrate Christmas together. There are many themes and layers to the film, not only with the various characters, but with war itself and how religion is used as a unifying force but also one that dehumanizes the enemy.

The message is as true today as it was in this most brutal war in which 20 million men were lost. To see the magnitude of those killed by machine guns, gas, and disease visit the World War I History Museum in Kansas City, Missouri. I thank the Minneapolis Conscious Cinema group for showing the film last evening. You can see the trailer of Joyeux Noel on YouTube.
Posted by Edward R. Eroe at 15:01