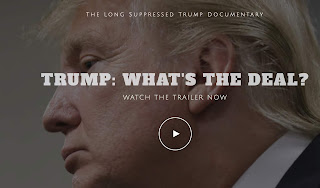 This documentary film called Donald Trump - What's The Deal? was commissioned in 1988 by Leonard Stern as the first of a series on celebrity businessmen. It was finished in 1991 and except for a couple of showings was never released until August 3, 2015.

Those of every political persuasion should watch this film, especially if you are contemplating on voting for Trump for President of the United States.
Posted by Edward R. Eroe at 12:23