It's A Wonderful Life! 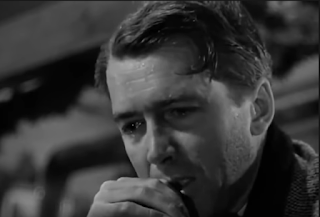 It's A Wonderful Life, the 1946 classic movie with James Stewart, Donna Reed, and Lionel Barrymore directed by Frank Capra, is one of my favorite, if not my favorite!

The film is considered one of the greatest films of all time. It was nominated for five Academy Awards, including Best Picture. The American Film Institute ranks It's A Wonderful Life as its Number 1 inspirational film of all time. It was met initially with mixed reviews and was financially unsuccessful but did become a classic Christmas film after it was put in the public domain in the 1970's. For more information go to the It's A Wonderful Life Wikipedia page.

In an article by Rachael Scott on December 19, 2020 titled How World War II shaped It's A Wonderful Life on CNN Entertainment, I learned something I never knew about the movie. Rachel says in the article:

"The movie captures a period of American life packed with some of the most landmark historical events in the 20th century, including the Great Depression and World War II.

After serving in the Army Air Corps, Stewart had been absent from Hollywood for five years when he was offered the role in It's a Wonderful Life. He was initially hesitant to do the film, according to biographer Robert Matzen, but it was his only offer except for a film featuring his war service.

'It's a Wonderful Life was a result of Jim's war experiences because it unlocked this depth of soul in Jimmy ... He had to learn to act again and that's what you're seeing on screen. It's like lightning that just got captured in a bottle,' biographer Robert Matzen told CNN.

This is seen in one of the film's most iconic, unscripted scenes, when George Bailey finds himself at the end of his rope: 'I'm not a praying man but if you're up there and you can hear me, show me the way.'

George Bailey wasn't scripted to cry, but Jimmy Stewart did.

'As I said those words, I felt the loneliness, the hopelessness of people who had nowhere to turn, and my eyes filled with tears. I broke down sobbing,' Stewart said in an interview in 1987."

I did not know this about the scene until reading Scott's article. It shows the empathy that Stewart had and was able to convey. The film speaks to us today during this terrible pandemic. So many are out of work, have lost loved ones to COVID-19, are suffering themselves from the virus, and are experiencing mental health issues including even thinking about committing suicide. Much like Jimmy did in the movie.

The Guardian Angel Clarence showed George Bailey how different the world would be if he no longer existed and what an impact we all make in the world. Clarence was the symbol of hope and while we may not have a guardian angel the movie shows that success is not about materialism but how much each of us give back. Today that includes everyone on the front line during the pandemic, most importantly healthcare workers but all others that allow us to obtain food and stay warm. Let's hope congress can do it's part by assisting those out of work and not playing politics with people's lives.

With vaccine now becoming available and a new administration about to be inaugurated there is hope again. Mr. Potter did not succeed and neither will Trumpism. Empathy and caring for everyone is back with a Biden Administration.