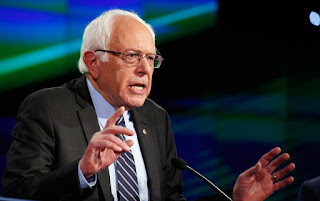 On December 2, 2014 Senator Bernie Sanders (I-VT) outlined a progressive economic agenda to reverse a 40-year decline of the American middle class and the growing income gap. It is titled, Sanders Details Economic Agenda for America and was originally published on his campaign website. Photograph by John Locher of the Associated Press.

Senator Sanders details a 12-point economic program and while I don't completely agree with all the items they are worth some meaningful discussion. His 12 points and my comments are below.

1. Invest in our crumbling infrastructure with a major program to create jobs by rebuilding roads, bridges, water systems, waste water plants, airports, railroads and schools. We should have invested much more in infrastructure from the beginning of the recession rather then worrying about deficits. I would also add that we should invest in our broadband Internet speed. By providing open and widely available Internet it would create many new businesses and help us keep up with other developed countries. We should be a leader in this area!

2. Transform energy systems away from fossil fuels to create jobs while beginning to reverse global warming and make the planet habitable for future generations. We are already behind in reducing our dependance on fossil fuel. We need to spend more money on alternative energy and, with gas prices falling now, it would be a good time to increase taxes on fossil fuel to fund alternative energy sources. There is not going to be one magic bullet for energy but lets get our American ingenuity moving to solve this one and again, take a world leadership role.

3. Develop new economic models to support workers in the United States instead of giving tax breaks to corporations which ship jobs to low-wage countries overseas. Why we ever thought it was a good idea to create tax incentives for companies to move jobs overseas I do not understand. We need to provide tax incentives for companies to keep workers in the US as this is also a national defense issue in having manufacturing infrastructure capability.

4. Make it easier for workers to join unions and bargain for higher wages and benefits. I have worked as a leader and manager in both environments. I find the best alternative to be for companies to provide all their employees with fair wages and benefits. Not just upper management or owners. If management did this there would be no need for unions. For companies to quickly react to changes in the marketplace unions can sometimes add extra time to processes.

5. Raise the federal minimum wage from $7.25 an hour so no one who works 40 hours a week will live in poverty. This is an absolutely no brainer to me. The only way to really get the economy going is to have money in the pockets of all workers. Everyone wins because more services and products are purchased which helps owners. Henry Ford had it right in knowing that workers in his plants had to have an income that allowed them to purchase the Ford car they were producing.

6. Provide equal pay for women workers who now make 78 percent of what male counterparts make. Why we allow this to continue makes no sense. I don't have all the reasons for this discrepancy but can't we fix it now?

7. Reform trade policies that have shuttered more than 60,000 factories and cost more than 4.9 million decent-paying manufacturing jobs. See number 3 above. We have plenty of great workers here in the US. Witness foreign car companies that build quality vehicles here. As said above, I also find this a national defense issue. Look how we transformed factories to make equipment needed in WWII almost on a dime.

8. Make college affordable and provide affordable child care to restore America’s competitive edge compared to other nations. I like the reform bill that Senator Elizabeth Warren (D-MA) has introduced. It is criminal that some students are coming out of school with loans equal to a second mortgage and not ever having the ability to declare bankruptcy and reduce or restructure these loans. The loans are like debtor prison and the interest rate is way above market these days. We should be investing in education and having higher standards on the diploma mill schools that are big beneficiaries of these loans.

9. Break up big banks. The six largest banks now have assets equivalent to 61 percent of our gross domestic product, over $9.8 trillion. They underwrite more than half the mortgages in the country and issue more than two-thirds of all credit cards. It is criminal that big banks received bailout money with much of it because of speculative derivatives and other risky investments that they created. All the banks did was turn around and foreclose on mortgages forcing many Americans to loose their homes and dignity. To add further insult they took bonuses with our tax money. The bailout should have gone directly to individuals because the banks would have been paid through mortgage payments and people would have been able to stay in their homes.

10. Join the rest of the industrialized world with a Medicare-for-all health care system that provides better care at less cost. We spend more than any other country on healthcare but yet have public health statistics like a third-world country. We all pay and get a lot less because insurance premiums are just cost-shifted to pay for this mess of a system, anyhow. In other countries this is not even a political issue. Both conservatives and liberals from the countries that have a true health care system, that assists all, think we are just crazy. We are if you really look at the economics of what we are doing. I would add to Senator Sanders Medicare-for-all system the ability for individuals to purchase private insurance on top of this system. I also do not believe health insurance should be tied to employers and I say that both as an employee and for a leader that has to choose plans for workers.

12. Reform the tax code based on wage earners’ ability to pay and eliminate loopholes that let profitable corporations stash profits overseas and pay no U.S. federal income taxes. We have provided tax breaks to companies to send work overseas and then expect those still employed to pick up the big tab. I do agree that we need reform as we have high taxes for companies, however, most companies with tax breaks, are not really paying that rate. Lets stop arguing and lower the rates and eliminate the breaks and loop holes.
Posted by Edward R. Eroe at 13:59