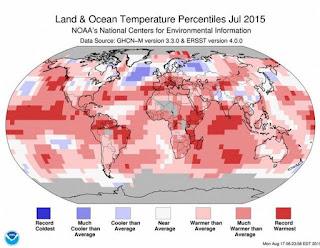 There have been several articles on global warming and this is another one titled, July 2015 was officially Earth's hottest month in recorded history, from Miriam Kramer at Mashable.

This issue is not a new one but it seems like heat records are being broken at an alarming rate. When is there going to be real action taken or are we destined to be like frogs in water that continues to get hot to the point of boiling?

While I don't want to minimize the work that several groups have been doing to reduce carbon emissions we need to step it up big time. A carbon tax, while it will be painful, is the right thing to turn the incentives around towards a more sustainable energy policy. Fracking, while keeping oil prices down, is causing measurable unwanted changes and is not the long-term solution.

We all need to do more, including myself, but we also need to elect leaders that stop denying and start doing! Thank you for reminding us Miriam.
Posted by Edward R. Eroe at 13:51